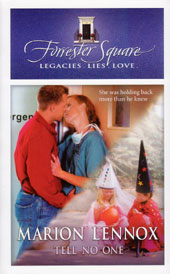 Police officer Jaron Dorsey had rescued a mother and baby from a burning car. Now evidence was mounting that the woman had kidnapped the infant. And when E.R. doctor Annabelle Peters pronounced the woman dead, Jaron's professional detachment disappeared. He was convinced Annabelle was holding something back - and he was determined to find out why.

Annabelle wasn't telling what she knew - but not for the reasons Jaron suspected. Nor was she as cool and detached as he seemed to believe. She felt the electrifying attraction between them - and Annabelle longed to act on it. But Annabelle had her reasons... for holding herself back, too.